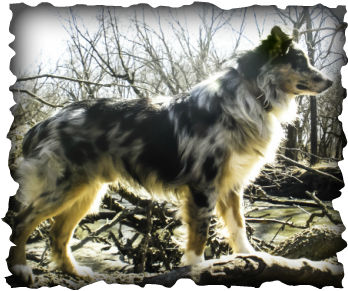 For some time, we have been on the lookout for a good male to bring to our farm as an outcross, but it was a difficult step to take because we also wanted to stay with the old bloodlines that have served us so well. Certik-Bertik kept catching our eye because he kept those Hangin' Tree bloodlines close to the forefront, and he is just one incredible dog.   (I mean how can you not love saying "He is the most titled Aussie in the world?")  Certik really exemplified everything we loved about the old working lines from his keen stock sense to his stick-to-it work ethic to his devotion for his family. When a male pup was available from him, we had to jump at the chance and so Hans joined our family.

Hans has fully met the expectations we had of a Certik son. He joined our household at the same time that Rose Marie was getting a knee replacement (that turned into a painful three surgery affair lasting most of a year).  While there is no doubt that Hans is an active fellow preferring to rough-house with Ren and bounce through life, he dutifully slowed his step beside Rose Marie recognizing that she wasn't so spritely as he. He paused at each step and gave her the "Are you sure you can make it?" look when they headed upstairs together. And as he has grown, his brains and focus have really shone through.  He loves games from fetching frisbees to "can you walk this tree log?" to "find your toy." (His only disadvantage on this score is our habit of directly comparing him to Ren's uncanny intelligence combined with Ren's extra two years of life experience.  Truly Hans is a remarkably sharp dog in his own right.)

After Rose Marie's knee replacement, the older more experienced dogs seemed a safer bet when working the cows until she could hobble a little faster if things went south so Hans hasn't gotten any time in with the larger stock. However, he has helped with the sheep and goats during feeding time or when someone (ahem.. Angela) forgot to latch the gate. He works with a lot of eye and intensity compared to most Aussies -- an intensity that is probably most similar to Char among dogs that we have previously worked.  Hans is a very silent worker and only barks or bites with purpose.  While this degree of presence and self-confidence often develops with time and experience, it is really impressive for a dog with limited time on stock.

Hans moved to Iowa with Angela late 2015 to get more diverse experiences, and (hopefully) see if they can enter some competitions together.  He has adjusted to being a housedog remarkably well (although he was less than impressed to go from a 50 - 70 degree Arkansas winter to  a 0 - 15 degree Iowa winter.)  Angela is hopeful that they can learn enough to get their feet wet in a few more trials this year.  We will keep you posted on the progress.
Genetic Testing Results (tests conducted by Pawprint Genetics*):
Hans tested Normal/Normal. i.e. not a carrier, for the following mutations MDR1 (Ivermectin Sensitivity), Collie Eye Anomaly, Cone Degeneration, Canine Multifocal Retinopathy 1, Degenerative Myelopathy, HSF-4 Hereditary Cataracts, Hyperuricosuria, Neuronal ceroid lipofuscinosis 6, and Progressive rod-cone degeneration.

*Our focus has always been and will continue to be temperament and instinct consistent with the old working Aussies. However, we do our best to also maintain healthy lines.  We try to sensibly use current technology to help in this goal.  After all, healthy dogs are needed for farm work so we are starting to utilize some of the genetic testing options available. I am not completely confident on prioritization and interpretation of the genetic testing , but Pawprint Genetics did answer some of my questions in a reasonably convincing manner. Here is their feedback to me if it helps: Link to Feedback.